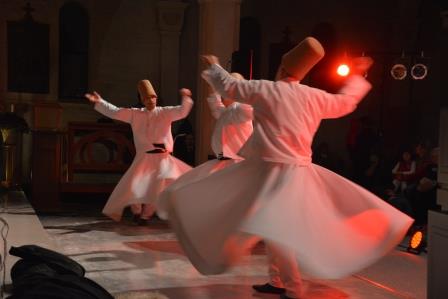 The Michigan Festival of Sacred Music (MFSM) was established in 2000, after a study conducted with support from the Irving S. Gilmore and the Kalamazoo Community Foundations concluded that such a festival was both desirable and feasible. The festival, initially one weekend long, is a biennial event, occurring in November in odd-numbered years. In 2004, the MFSM began to present “off-year” events during the intervening seasons, to increase awareness and visibility, and further its mission. In 2007, MFSM assumed co-sponsorship (with First Congregational Church) of the Messiah Sing, held on the Sunday following Thanksgiving. The “weekend” festival expanded to four days, then six days, and by 2009 it covered 10 days. This practice, which continues today, accommodates more events, while spreading them out less densely in a manner that makes multiple events easier to attend, creates more opportunities for collaboration with other organizations, makes more opportunities for outreach with artists,
and enables use of a wider variety of venues in more widely distributed locations.

MFSM offers events which represent diverse religious traditions, thereby promoting mutual respect and understanding through the sharing of music and associated cultural tenets treasured by these traditions, celebrating our differences and shared common values. In so doing, MFSM aspires to accentuate community harmony by encouraging individual and group participation from all segments of society. The “What’s Sacred to You?” initiative, begun in 2013, partners with humanservice and environmental non-profits, providing information booths for each MFSM event.